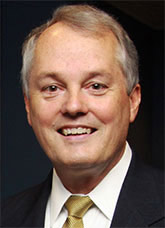 Dr. Cook formerly served on the administrative staff of Baylor University in Waco for ten years. During that time, he taught at least one undergraduate or graduate class each semester. His responsibilities at Baylor included serving as Administrative Coordinator of the Gerontology Program, Assistant Chaplain, Director of Denominational and Community Relations, and Special Assistant to the President for Denominational Relations. Before serving at Baylor, he served as pastor of First Baptist Church of McGregor, Texas. He also has served ten interim pastorates.

Dr. Cook has a Bachelor of Arts degree from Baylor University, a Master of Arts in Aging Studies from the University of North Texas, a Master of Divinity from Southern Baptist Theological Seminary, and a Doctor of Ministry from Southwestern Baptist Theological Seminary. Dr. Cook serves as Permanent President for the Class of 1972 at Baylor University. He also served as Graduating Class President for the Class of 1975 at Southern Seminary.

His wife, Sheila, received her Bachelor’s degree from Georgetown College and her Master’s degree in education from the University of Louisville. She served as a teacher in the public school system for eighteen years. They have two sons, David Daniel (1983) and Mark Andrew (1986).  David serves as assistant to the president for legal and external affairs/assistant professor of leadership, and Dean of Global Studies at Dallas Baptist University and is married to Nicole Dodson Cook, and they have three children, Molly, Caleb, and Gracie.  Mark is married to Shannon Baldwin Cook and serves as an assistant professor of leadership and biblical studies at Dallas Baptist University.

Dr. Cook and his wife, Sheila, are active members of Park Cities Baptist Church, where he serves as a deacon. He has been involved with the Baptist World Alliance since he was a college student. He was a charter member of the BWA General Secretary's Circle and served as chair of the Promotion and Development Committee.  He also has served as chair of the Consortium for Global Education. In addition, Dr. Cook served as a member of the steering committee of the Billy Graham Metroplex Mission. He formerly served on the Board of Directors for the Council for Christian Colleges and Universities.  He currently serves as Acting Chair of the International Association of Baptist Colleges and Universities Board of Directors. 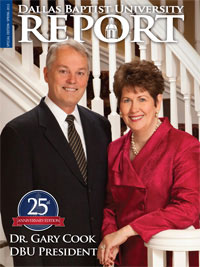 “For I know the plans I have for you,” declares the LORD, “plans to prosper you and not to harm you, plans to give you hope and a future.” - Jeremiah 29:11

Vision Statement
Building a great Christian university that is pleasing to God by producing Christ-centered servant leaders who are transforming the world.